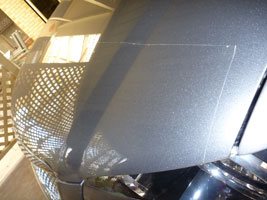 Remember that first paint chip that you got on your brand new vehicle? You want to keep it looking new for as long as possible and SMART Paintworx can help you do that with Paint Protection Film – also known as “Clear Bra”

Clear Bra is a thermoplastic urethane film that is applied to the leading painted surfaces of a new or used car in order to protect the paint from stone chips, bug splatter and minor abrasions.

This film is also used on airplanes, RVs, cell phones, electronics, screens, motorcycles and many other areas. Its first use was military to protect helicopter rotor blades and worked its way into general aviation. The racing industry followed suit and filtered in to daily-driven automobiles. As early as 2000, uses of this product has been seen and placed on electronic devices becoming quite popular for protecting smart phone and PDA screens.